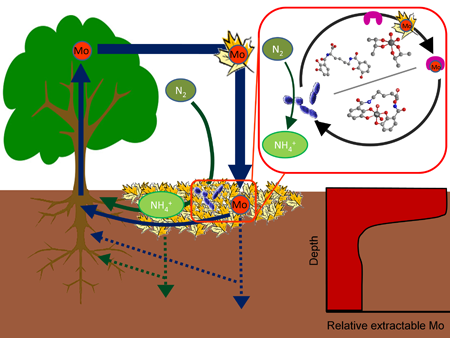 Nitrogen (N) is often a limiting nutrient for plant growth in terrestrial ecosystems. Nitrogen fixation, the reaction that transforms atmospheric N2 into bioavailable ammonia, is mediated in nature by the nitrogenase enzyme in N2-fixing bacteria. Nitrogenase has three isoforms that have different metal requirements: the molybdenum nitrogenase, the vanadium nitrogenase and the iron-only nitrogenase. We are interested in understanding how metal availability affects nitrogen fixation in terrestrial ecosystems.  We combine field and laboratory studies to achieve this goal.

In the field, we have demonstrated the importance of molybdenum (Mo) as a limiting nutrient for asymbiotic nitrogen fixation in Panamanian tropical forests, suggesting that Mo may play a key role for N2 fixation in other tropical and temperate ecosystems. The basis for Mo limitation is the low Mo concentrations in the continental crust (in the few ppm range), and leaching can potentially reduce soil Mo concentrations even further. We have shown that molybdate (the main form of inorganic Mo in oxic systems) is strongly retained in top soil layers through binding to tannin-like molecules in natural organic matter. This suggests the existence of a mutualistic relationship between higher plants and asymbiotic nitrogen-fixing bacteria based on metal availability. We hypothesize that the tannic compounds in plant-derived material maintains Mo in the top soil layer where nitrogen-fixing bacteria access it to fix nitrogen, a fraction of which is ultimately used for plant growth.

In the lab, we aim to understand how microorganisms overcome the challenge of tightly regulating their intracellular metal concentrations to avoid toxicity but still maintain concentrations above those that limit growth. We have discovered that the nitrogen-fixing soil bacterium Azotobacter vinelandii excretes low molecular weight ligands (metallophores) that bind free or weakly complexed/adsorbed metals in its external medium. The metallophore complexes of toxic metals (such as tungsten) are unavailable and remain outside the cells. In contrast, the metallophore complexes of limiting metals (such as molybdenum or vanadium) enter the bacterial cells through specific transport systems. This strategy allows bacteria to control metal speciation in their environment, thereby facilitating the difficult task of controlling which metals enter the cytoplasm.

Our ongoing work focuses on determining the roles that “alternative” nitrogenases (vanadium-, iron-only nitrogenase) play in nature using both field and laboratory approaches. At a broad scale, these research efforts will help us understand the interplay between major and minor elemental cycles (like that of nitrogen and trace metals), especially the impacts that life forms have on maintaining or disturbing such cycles.