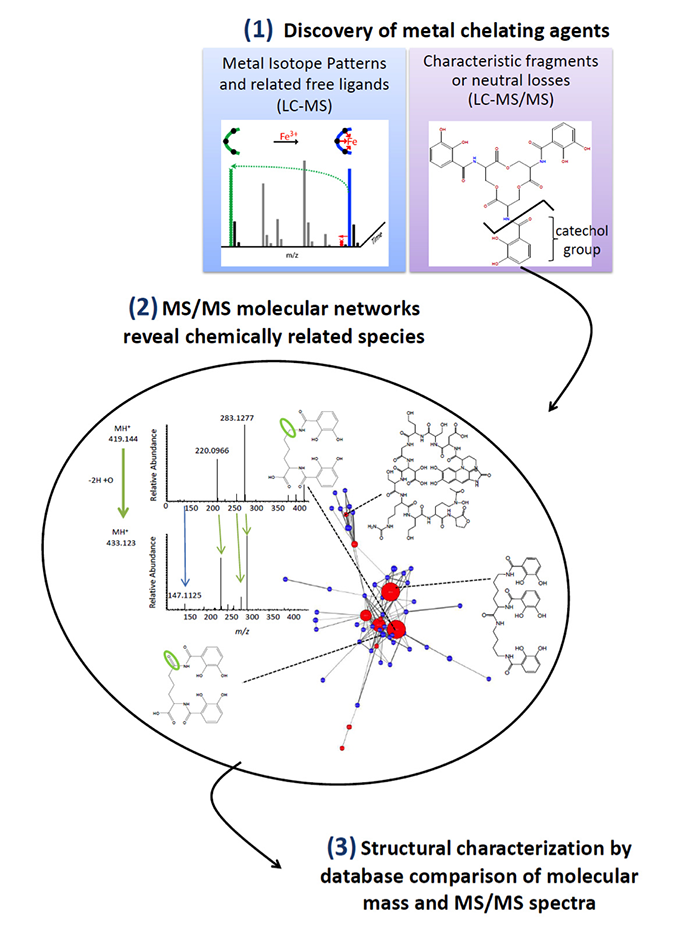 In natural waters and in culture media, the bioavailability of trace metals to microorganisms depends on their binding to a variety of weak and strong complexing agents.  See also Metal Uptake by Phytoplankton and The Role of Metals in Nitrogen Cycling in Soils.  In nature, these organic compounds include humic substances, intracellular molecules released by cell lysis, and ligands released by microorganisms for the purpose of metal detoxification or uptake. Most available data on these complexing agents come from electrochemical measurements that provide information on their concentrations and binding strengths but not on their chemical identity. To elucidate the chemical nature of this unknown pool of individual ligands we develop and apply new approaches including high-resolution liquid-chromatography electrospray mass-spectrometry using Orbitrap platforms.

To scan the myriad of signals acquired during the LC-MS runs for features that relate to metal complexing agents, we use specialized in-house written software (ChelomEx) that searches for metal isotopic signatures associated with the complexes and their associated free ligands. In addition, we mine collected high-resolution MS/MS spectra for fragments and neutral losses that are characteristic of certain known siderophore classes (e.g. catechol residues, see figure panel 1).

The analysis of culture supernatants from the N2-fixing bacterium Azotobacter vinelandii reveals many putative metal complexing agents while MS/MS fractionation of the compounds provides structural information. Among these compounds are the known siderophores Azotobactin, Protochelin and Azotochelin as well as other, chemically related compounds, yet unreported (figure, panel 2).

Using this approach we are able to discover low abundance metal chelating agents even in highly complex organic matrixes. Chemical characterization and identification of the discovered species is facilitated by comparison to databases of siderophores and their known metal binding motifs. Currently, we are performing ‘chelomics’ analyses of bacterial cultures and extracts of seawater and soil. The first results reveal a high diversity of known and unknown metal-binding secondary metabolites, such as siderophores, and allow us to get a better understanding of the role of chelating agents for trace metal bioavailability and biogeochemical cycling.